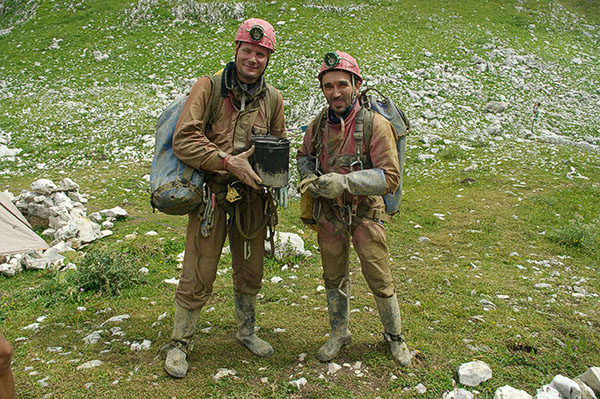 Hello All, So, we came back from Abkhazia - everything was ok on our way back. We could descent to the "Game Over" chamber, which is at -2080m deep. We supported divers - who dived across the Kvitochka sump at -1980m, and they reached the surface of Dva Kapitane sump, -2150m.

Before the mountains we had a difficult flight with AEROFLOT - they were too strict with the weight allowance - and we had to pay a few Euros. Fortunately not as much as in the first minute: we had to bargain a lot... And they did not give us any vodka - as a result of the financial crisis. Abkhazia is a quite poor country. After several yrs war we did not expect more, but that was safe, and filled with Russian tourists. The seaside is almost perfect - just a bit hot and too sunny for me! We spent 2 days on the beach - while we had to arrange our visa as well in Sukhumi, the capital of Abkhazia. Our team was very international: Lithuanian leadership, Irish, UK (from Northern Ireland) caver, Spanish and Hungarian participants: big mix of languages! We were 20, including 12 cavers who were able to go deeper than 1440!

The Lithuanian's organised a lot: Abkhazian visa and entry permit, food transport via Belorussia and Ukraine by train (1,5 tonne of gear, including ropes, food, diver and climbing gear, etc) - we had easy thing with our personal bags!!! The transport from the seaside to the camp was made by old Russian army tracks: it took 6 hours! Fortunately we travelled together a couple of polish cavers (they had a different expeditions to the other part of Arabika Massif) - that was a fine 6 hours!!! We had a few "acclimatisation" trip to the cave - to -600m, the end of a narrow meander. All together we had 48-50 bags we had to take down: it took a few days... 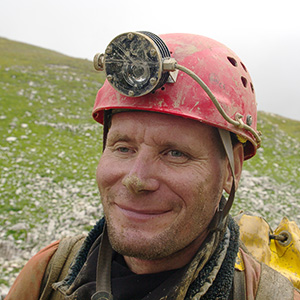 Then we started our "summit" attack, which meant at least 9 days underground work. I was together Kutya, and Joska and Lajos worked on another team. Our task was simple: just took everything as deep as just possible. We had 3 underground camps: 700, 1410 and 1640 deep. There was loads of water - although the Ukrainians (they had different expedition to the other part of the cave on the same time) sad the cave was quite dry: we have never seen such lot water! The first 500ms of the cave was easy - just 3 pitches, and short meanders. At -500 starts a meander - Sinusoida, which is a 'bit' uncomfortable with 2 bags, and the water appears on that meander.

Between 700 and 1100m actually there is a long and strong waterfall - with a couple of very narrow meanders - thanks for the lord they are not too long... Under 1215's camp (we did not use that camp) the most narrow part of the pitches - loads of uncomfortable pitches, loads of water, heavy bags - but we passed that! The camp at -1410 is the most comfortable, big and loud... there is no waterfall too close.. The S1 sump just about 3 ms long, half meter deep - free diving, at -1440. England was a good place practising that in May! After water again, and under 1550 the limestone changed to a beautiful black one: that was wonderful!!!

From 1640 till 1700 the most narrow part of the cave: Way to the dream..., couple of pitches and the Yellow Tube, that is a 60m crawling, there is no air ventilation: with bags that was terrible... The Game over actually a big chamber - when we were there it was a lake: that part can be filled with water from -2080 to -1960, which is scary! By the way we had telephone connection with the surface; we knew the weather and the forecast as well!!! During the diving operation we had a bloody long camp, of course we had to wait for them, then they had to pack their gear together before we could start our way up: from -1800 to the surface less than 2 days, with 2 bags of each.

From -700 to the bottom and up to -700 we (Hungarians) used our new style neoprene - that is an ultra soft, stretch type! After one week caving on our neoprene - and we did not have any injuries at our knee and our elbow!! After our way up we waited the test of the expedition on the surface, and we went back transport bags up to the surface! 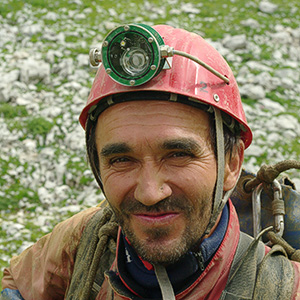 All together we descended and climbed 3800ms! After 3 weeks mountains we really enjoyed the Abkhazian beers and seaside: we just hanged out on a bar, close to the beach! We did that with our members and Russian and Ukrainian cavers! That was a fantastic few days: we just drank beers, swam and spoke about caves and caves!!!

About our lamps: Four Hungarians used Scurion's - P4 model, with 5.1 Ah batteries. We almost used our lamps on 3rd level of the economic way, and we busted a lot - we were very proud to check everything that was a bit interesting - the distance did not bother us! Each of us used 1.5 batteries during 9 or 11 days caving! So - that was better as we expected! The light of them was similar to normal carbide light - but we did not have to carry loads of carbide and the same amount of used carbide up... Anyway on the cave is not allowed to use carbide - the only proper way lightning is the SCURION, we believe that!!!! So - that was our summer expedition! Marci 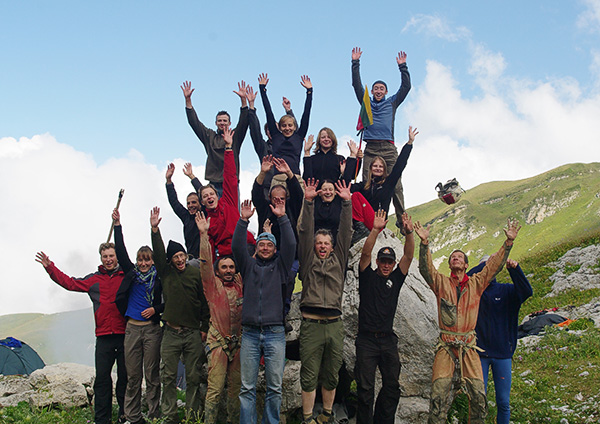 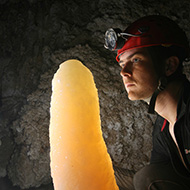 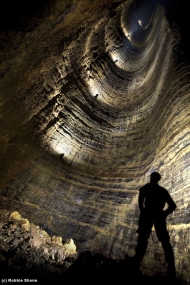